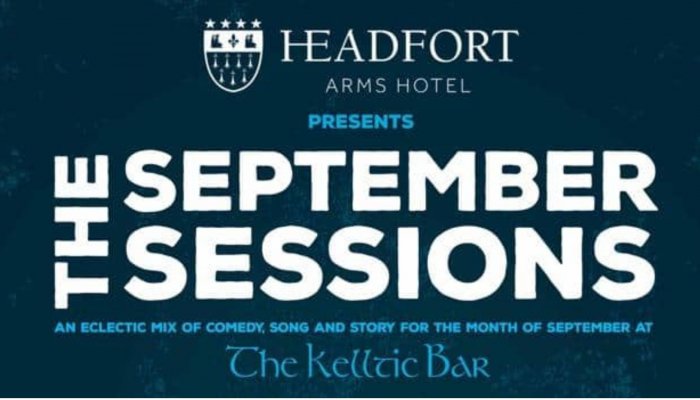 An eclectic mix of comedy, song and story for the month of September at the Kelltic Bar, Kells

September is typically the month when things settle down after the summer months but not in Kells, where the simmering art scene in the heritage town, reaches boiling point with a Thursday calendar of live entertainment. With the support of  the Arts Council of Ireland, September sees an eclectic mix of talent come to Kells to provide an Autumn

full of exciting sounds, song and laughter in the form of the ‘September Sessions’, a Thursday night campaign of wonderful artists from many domains.

What a kick off to the month on Thursday September 1st with ‘3 Bucks Left’ in the Kelltic bar. A  spin-off of County Mayo's own Hardy Bucks, the act was created by childhood friends who embark upon a hilarious show described as lofty, self-deprecating introspection, coupled with rowdy philosophies.

Thursday September 15th will see local talent take us all back in time to enjoy a night of ‘The 90’s Unplugged’. Nessa Olohan and invited guests will draw on a stellar list of local talent who will come together to perform your nostalgic numbers with a singalong vibe to put everyone in weekend mood, a day early!

One of Kells’s best loved musical sons returns home to perform an intimate night from his impressive repertoire on Thursday September 22nd. Oliver Cole, born and raised in Kells has spent the past number of years in Dublin, where he writes, records, plays and promotes his music full-time. Ollie has a range of influences from The Shins, Brendan Benson, Bright eyes, Elliott Smith, The Beatles and Neil Young. Best known as the front man of Irish three piece Turn, Ollie has been gathering momentum steadily since his departure from the band in 2006. Ollie’s combination of true musicianship and consistently compelling song writing has earned him the respect of fellow artists and the enthusiastic support of audiences wherever he plays.

Needing little introduction, Kells will no doubt give a huge welcome to the ever successful and charismatic Paddy Casey on Thursday September 29th. Having been at the forefront of the Irish music scene since his multi platinum selling debut album ‘Amen (So Be It)’, Paddy Casey’s career has taken him all over the globe touring with acts like The Pretenders, R.E.M, Ian Brown, Blondie and Tracy Chapman to name a few. Closer to home he has played all over Ireland, including a sold out Dublin Castle, RDS and a record-breaking week long run in The Olympia Theatre, alongside special guest spots with U2, Pearl Jam, Bob Dylan and more. It’s an exciting time to listen to the formidable artist from Crumlin. Paddy Casey is set to release his brand new single ‘Won’t Take Much’ alongside announcing the release of his fifth album ‘Turn This Ship Around’, a double album this month.

And finally on October 6th InBetween Honey a 5-piece band from Navan, who formed in June 2019, are former school mates Dylan Hickey, Ciara Mc Manus, JohnPaul Melady, Matty Melady and Blayne Moran. Their music can be described as indie rock to indie pop with their influences including The Killers, The Cure, Blossoms and The 1975. Their music is a mix of sounds of classic bass and drums, cutting indie guitars with an element of bright synth riffs with the occasional piano feature.Since forming, the band have played to sold out audiences in venues such as Whelan's, the Workman's Club and Boyles of Slane. They made it through to the final of Sea Sessions' "Live & Unsigned" in the Chasin' Bull, Bundoran in January 2020 as well as playing sets at the Trailer Park Stage Electric Picnic 2019 and headlining Whelan's in April 2022 The group has released 5 singles to date with a notable debut, "Beg, Steal & Borrow," with the follow-up released 4 months later entitled, "How To Be Brave."

Get your tickets now!