Kells is synonymous with early Christian architecture, and it remains one of Ireland`s greatest monastic settlements. Before the arrival of Christianity Ceanannas Mór, the Irish for Kells, meaning “great residence,” was a royal residence much like the famous Hill of Tara. It wasn`t until the 6th century that Kells came to prominence as a monastic settlement. St. Colmcille or Columba was granted Kells by the then High King, Diarmuid MacCarroll, of the Uí Neill. He was the cousin of Colmcille and it is said that the two had many disagreements. Indeed Diramuid gave him the palace at Kells to compensate for some action of his against Colmcille. Kells is most famous as the home to “Ireland`s finest treasure,” the Book of Kells. The book comprises of the four Gospels of the New Testament; it is a masterwork of western calligraphy with complex and extravagant illustrations and ornamentation. The manuscript is brought to life with figures of humans, animals, mythical beasts, Celtic patterns and vibrant colours. The true origin of the book remains a great mystery to this day. Although the name of the book is derived from the Abbey of Kells, where the book was housed for the medieval period, the place of production remains the subject of considerable debate. The debate centres on another monastery established by St. Colmcille at Iona, Scotland. The 9th-century dating of the book coincides with successive Viking raids on Iona. Around this time the monks relocated to the monastery in Kells, perhaps bringing the book with them. Whether or not the book was produced in Kells, Iona or perhaps a combination of both it remains one of the world`s greatest manuscripts. Although the book now resides in Trinity College Dublin, there`s a duplicate copy of the book in the Tourist office in Kells. 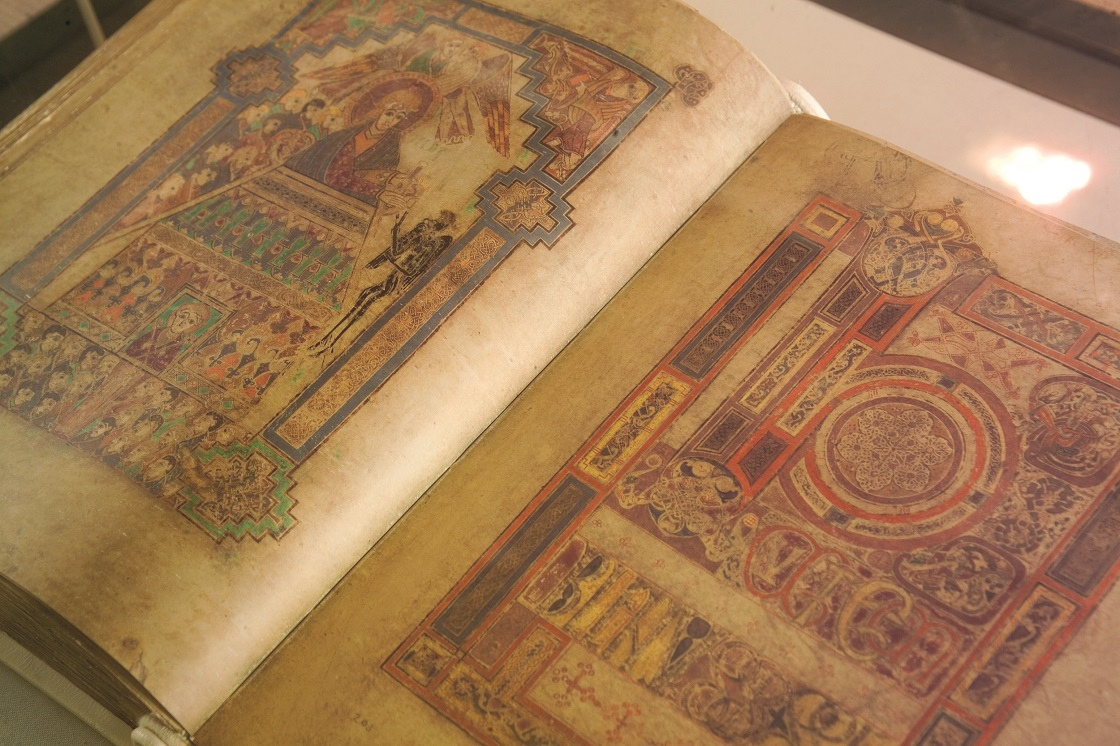 Colmcille and the first copyright law: Interestingly enough Colmcille became embroiled in the world`s first known case of copyright infringement. The legend centres round Colmcille`s former teacher and fellow monk Finnian. He brought the first complete Latin translation of the Bible back to Ireland following a visit to Rome. Colmcille was a pioneer of spreading the teachings of the church through written medium and he encouraged monks to copy, study and disperse the material. Indeed it`s this particular practice of transcribing by Irish monks that is credited with saving the church`s literary treasures during the Dark Ages. Obviously on seeing the first complete Bible that had arrived in Ireland Colmcille was excited at the prospect of making copies to spread the word of God throughout the land. Finnian didn`t agree and so Colmcille went about copying the book in secret or maybe he just borrowed the book without Finnian`s knowing. Once Colmcille`s deception was uncovered Finnian brought the matter to the High King Diarmuid at Tara for arbitration. Diarmuid ruled against his cousin Colmcille with the now famous Irish Proverb, “To every cow belongs its calf, to every book its copy.” Essentially every copy of the book made belonged to the owner of the original book.

St. Kieran`s Well: Just outside Kells, in Carnaross, you will find one of the most beautiful Holy Wells in all of Ireland. It is situated on the side of a beautifully green sloping bank. Since Early Christian times, Pilgrims have made the journey by candlelight, arriving before midnight, to the sacred Well on the day before St. Kieran`s Sunday. The Well is believed to have curative powers and was adopted by the Catholic Church as a major healing shrine. Legend has it that the sacred trout appear after midnight on the eve of St. Kieran`s Sunday, make the sign of the cross and disappear again until the following year. The waterways that feed of the well are believed to heal foot ailments. The site also contains a fairy tree and there is an Ogham Stone in the old graveyard at Castlekieran. 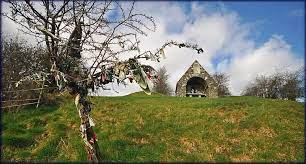